The Green Wave Gazette • May 23, 2021 • https://greenwavegazette.org/20857/showcase/spring-athlete-spotlights-week-one/ 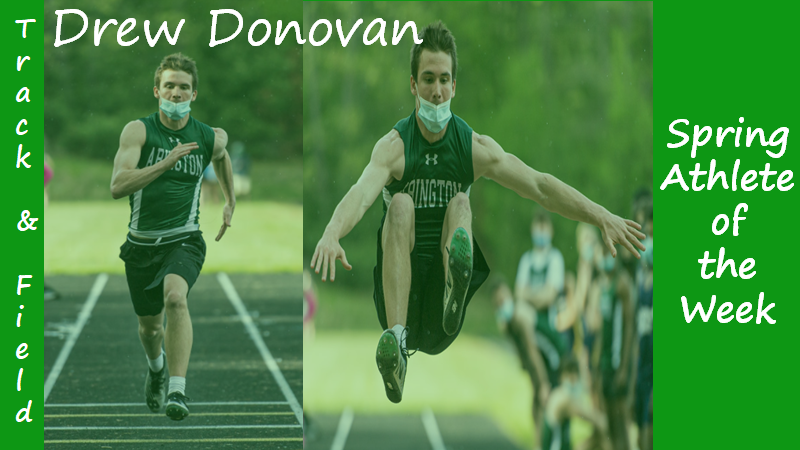 Bill Marquardt, with permission, and graphics by Emily Coulsey

Junior Track & Field member Drew Donovan is highlighted as a Spring Sports Athlete of the Week.

Abington High School’s Student Athletic Advisory Committee(SAAC) has decided to honor two athletes during each week of the 2020-2021 Spring season. SAAC will recognize one male and one female athlete per week, from the Girls Lacrosse, Boys Lacrosse, Track & Field, Softball, Baseball, and Ultimate Frisbee teams. Highlighted on the first week of these Spring spotlights are Drew Donovan and Kaitlyn Thetonia.

This week’s male athlete spotlight is junior Drew Donovan, who participates in Spring Track & Field. Donovan recently broke the 100-meter record previously held by Len Steele. He broke the 53-year record with a 11.24 second finish. In just his second season running track, Donovan is one of the team leaders in points. Donovan credits his success to Coach Caseley, Izzy Ricketson, and Elizabeth Roy, who push him in practice every day to get better. Outside of track, Donovan suits up for the Green Wave Basketball and Football teams. He received South Shore League All Star honors in football in the Fall II season. In the first two games of the year, he exploded for 11 catches for 250 yards and 3 touchdowns. In the classroom, Donovan’s favorite class is science with Mr. McGinness. His favorite memory is winning the 2019 football state championship. With a full senior campaign ahead, Donovan will look to continue his success and lead his teams to championships.

Kaitlyn Thetonia is this week’s female athlete spotlight! She is a captain for the Girls’ Lacrosse team this season. Thetonia plays defense for the team and wears jersey number seven. She has been playing since freshman year and wanted to play it because she “wanted to play a sport in high school and felt that lacrosse would be fun.” During her sophomore year she won the most improved player award and credits her dad for her success and said that “he has also been one of my biggest fans and gets very involved in the games. He’s always yelling from the sidelines and is very proud of me!” Her favorite memory besides the pasta parties was when the team beat North Quincy in triple overtime. Off the field, Thetonia is a member of NHS and Peer Leaders and plans to continue her education at UMass Boston in the fall. As she prepares to leave AHS, she says her favorite part of high school is “being able to see all my friends in school and make the day fun! I have made so many memories at AHS and I still can’t believe I’m graduating this year.”