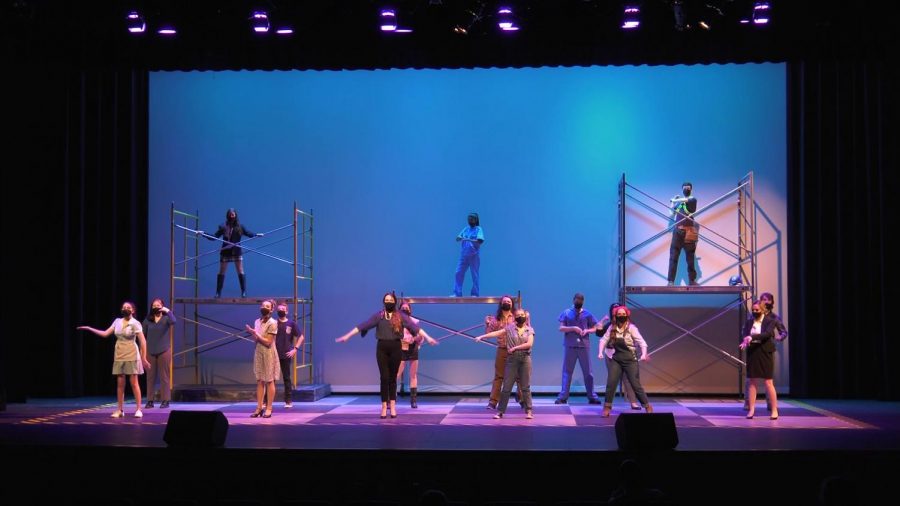 Abington High School students during the filming of "All the Livelong Day" for their upcoming April 29-30 performance of WORKING. The musical was filmed due to COVID-19 limitations on live theatre.

The COVID-19 pandemic has brought a lot of challenges in the past year. Thankfully to science and research about the virus, society has found ways to function as normal as possible, while also staying safe and protecting others.

With that, schools have found ways to give students as good a year as possible, despite the pandemic’s restrictions. Some clubs, sports, and other extracurriculars occurred as safely as possible.

At the start of the school year, there were many restrictions on band, choir, and drama. The kids in drama were especially worried about even getting a musical this year.

In December it was announced that AHS would be putting on a production of the musical “Working.”  It will be streamed on April 29th and 30th.

As a person who has performed over 40 productions of plays and musicals since age nine, this production was the most unique and different.

The school was moved to fully remote during the week of auditions, meaning performers had to audition with a monologue during a TEAMS meeting with Mr. Shannon and Ms. Tomlin. Performers sang a song of choice for the audition through a submitted video, using the website Flipgrid.

After the cast list and rehearsal schedule was released, performers began a very strange production, different from any others done before.

Music rehearsals could only be done remotely on TEAMS meetings, due to the Department of Public Health’s rules on indoor singing at the time.

When rehearsals happened in the school’s auditorium, either when blocking scenes or choreographing dance numbers, performers had to sit in taped off seats that were measured to be six feet apart from each other. And, they had to sit in the same seat every rehearsal for contact tracing.

By far, the most different part of this production was putting the finished product together. In late February, the Department of Public Health finally allowed for indoor singing, as long as masks stayed on, and each person kept a distance of at least 10 feet.

The singers pre-recorded their songs to ensure that the distancing rules for singing inside wouldn’t be broken, and to make for smoother sessions recording the show.

The show was recorded over a six-week period in March and early April. The process of filming the show felt like a movie, but still had the feeling of live theatre. The cast did multiple takes of each number and swapped out actors to make sure everyone had the chance to be seen.

It was a very unusual production, but enjoyable nonetheless. The cast was honestly delighted just to do a show, especially those who were a part of the cancelled musical Mamma Mia last year.

Seniors were particularly grateful to get one last school musical before graduation in June. The cast and crew is very thankful to the Director Mr. Shannon, Producer Ms. Tomlin, Principal Mr. Bourn, and everyone else who made the production possible, and never gave up on us to make sure we got this show done.

While it was a challenging process with many hoops to jump through, the cast is very excited to share with friends and family.

The Green Wave reporter for this article is also a member of the Drama Club and performs in the musical WORKING.