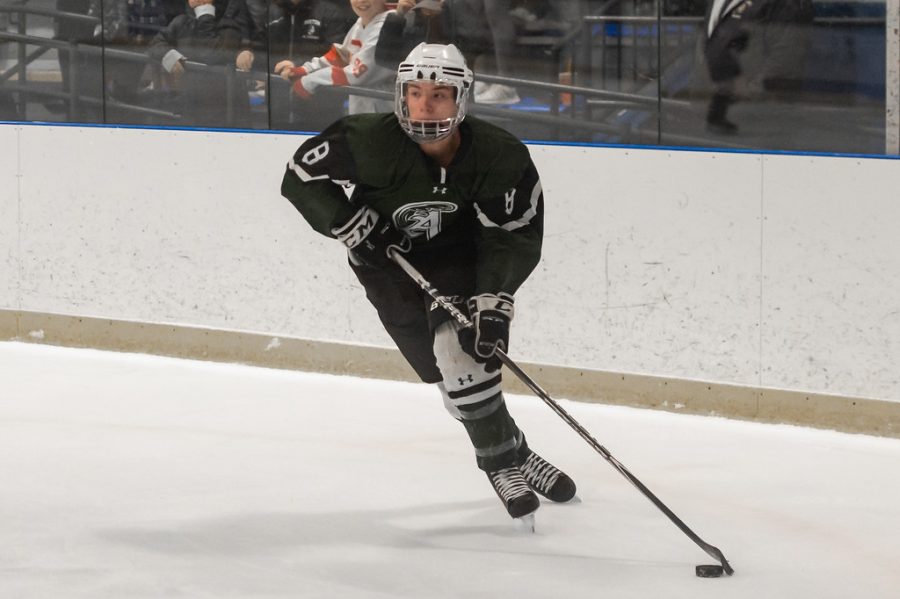 Abington High School senior John Polito skating in a game during the 2019-2020 season.

At the end of every season, the coaches in the South Shore League come together to determine who will be awarded the player of the year as well as choosing the All-Stars.

Abington Hockey star John Polito was named a South Shore League All-Star, as well as player of the year. He shared the latter honor with Norwell’s Cole Berglund.

“Happy I was able to have the opportunity to earn player of the year,” Polito said.

Winning player of the year “means a lot, considering there was a point where we thought we weren’t going to have a season at all,” Polito added.

The award was well deserving for the senior captain. He scored 18 goals and dished out 18 assists in his senior campaign as well as notching his 100th career point earlier in the season against Cohasset.

Polito has had a long run of success in his hockey career at Abington High School. A four year varsity player, he credits all this success to “teammates, friends, family and coaches” Polito said.

Although this was an unusual season, Polito still has some great memories of this year. His favorite moment this season was “when we came back against Norwell with under a minute left,” Polito said.

The game ended in a 3-3 tie with Polito scoring all three goals. His first points against Norwell since his freshman year on the team. Norwell would go on to win the South Shore League tournament that was held at the end of the season.

Teammate and fellow senior Mark Cashman, who Polito has shared the ice with these last four years, said, “His [Polito’s] determination and drive to get to the next level fuel him to be the best he can. His work ethic is second to none and that shows in the stats he puts up.”

Polito will leave Abington 3rd on the all-time points list, finishing with 124 career points. He trails two members of Abington’s 2014 class, Joe Marella who had 168 points and Jake Quinlan who had 166 points.