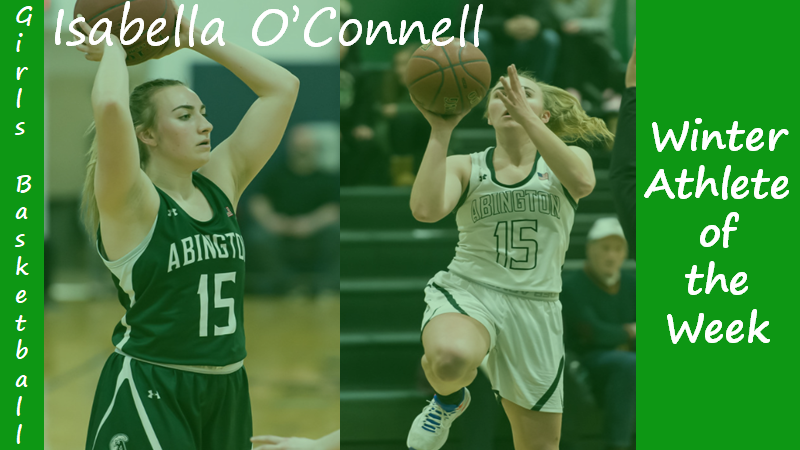 Bill Marquardt, with permission, and graphics by Emily Coulsey

Senior Girls Basketball Captain Isabella O'Connell is highlighted as a Winter Sports Athlete of the Week.

Abington High School’s Student Athletic Advisory Committee(SAAC) has decided to honor two winter athletes during each week of the 2020-2021 winter season. SAAC will recognize one male and one female athlete per week, from the Girls Basketball, Boys Basketball, and Hockey teams. Highlighted on the second week of these spotlights are Isabella O’Connell and John Polito.

The female winter athlete spotlight for this week is Isabella O’Connell. She is a senior captain of the Girls Varsity Basketball team. O’Connell plays in the position of point guard, and has been playing the sport since Kindergarten. During the school year, she also participates in soccer and track. Her favorite memory of the sport is playing in the state tournament during her sophomore year with both of her sisters. She chose to play basketball as she has always had a passion for the sport and has fun while playing. Following high school, O’Connell plans to pursue a major of Exercise Science in college and hopes to further that into Physical Therapy. Her goal is to work with rehab patients with prosthetics. She also hopes to continue playing soccer in college. O’Connell credits her successes to her parents, family, coaches, and teammates who have all pushed her to be her best and showed her the potential that she has. Her favorite teacher is Mrs. Casey; O’Connell says, “I have had Mrs. Casey as a teacher since I was in 7th grade. Now having her as a teacher and coach throughout high school she has been an awesome teacher in the classroom, and truly is a great role model. She has helped me so much in the classroom and on playing fields.” Look out for Isabella O’Connell’s name in the headlines as she wraps up her senior basketball season and continues on to track in the spring.

The male athlete spotlight for this week is senior Hockey Captain John Polito. With a recent win over Cohasset, Polito marked his one hundredth career point, being only the sixth player in Abington hockey history to earn this achievement. Polito, the left wing, has been playing hockey since he was only four years old and has played for the Green Wave all four years of high school. When asked about his favorite memory from the sport, he brought up when the team beat Rockland for the first time in six years. The senior captain loves the physicality and speed that comes with playing hockey. His idol and favorite hockey player is Johnny Gaudreau, who was told he was too small to play hockey but now is a star in the NHL. When asked about his all-time favorite high school memories, Polito highlighted “the pasta parties and the playoff games.” His resume is very impressive, and it includes becoming captain during his senior year, being named as an Enterprise All Scholastic, and joining the infamous 100+ point club. Polito looks to continue his academic and athletic career by playing at the next level, whether that be in college or at the Juniors level. Be sure to look for the name John Polito in headlines this spring, as he is also a strong baseball player for the Abington Green Wave.