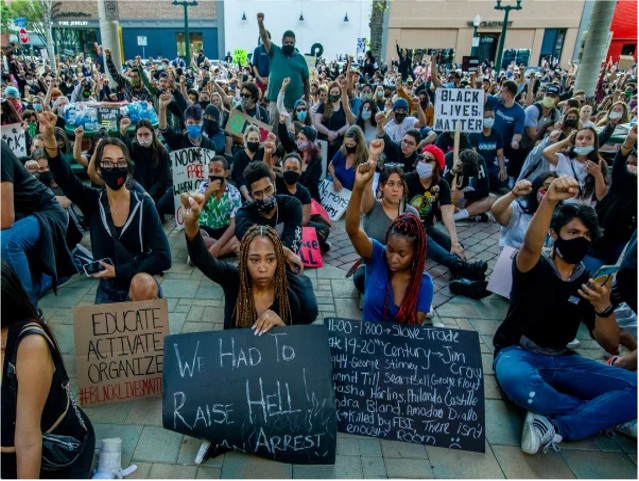 A large group of demonstrators in Boston on May 30, 2020 peacefully protest for the Black Lives Matter movement.

Going to the Black Lives Matter protests on May 31, 2020 was probably one of the scariest yet beautiful things I have ever done in my life. So many people were supporting this movement and wanting justice because too many innocent black men and women were getting hurt or killed for us not to protest.

The protest happened in Boston. There were thousands of people there, all to support that Black lives matter and to preach for justice. There was pent up anger that was finally let out.

We gathered in Roxbury and marched to the State House to acknowledge the lives of Ahmaud Arbery, Breonna Taylor, and George Floyd. Lives that had been lost in February, March, and May, respectively. I marched with two of my Abington friends and many other people through Boston. People were hanging from their windows, showing support of our protest.

Although we were in the middle of the Covid pandemic, I felt as if I had to go. I learned about the protest through social media. We were driven in to Boston and dropped off. We three then started to walk with the crowd.

I joined this protest because I felt that I had to use my white privilege and stand up for my friends who are people of color. Stand up for the the wrongful deaths in the last year. Stand up for equality and to say finally enough is enough. This is the twenty-first century and people are still fighting for their lives. Fighting to feel equal and to be treated as equal. I used my white privilege because I was able to.

Being at the Boston protest that Sunday evening was nerve racking, but I knew I had to be there. It was important. I could not miss this protest. I couldn’t stay home and ignore what was going on in the world and specifically in the US. I thought to myself “I would rather get sick than turn a blind eye to this and pretend something this big wasn’t happening.” So, I put on a mask and went.

I believe that the protests showed how strong and willing we are to fight for each other. I think it is awful that we had to do this in the first place. More than 150 years ago we were fighting for the same thing, equality, and not enough has changed. I think that is incredibly sad.

I hope in my lifetime we can change and that all people can eventually feel equal.