The Road to Champions 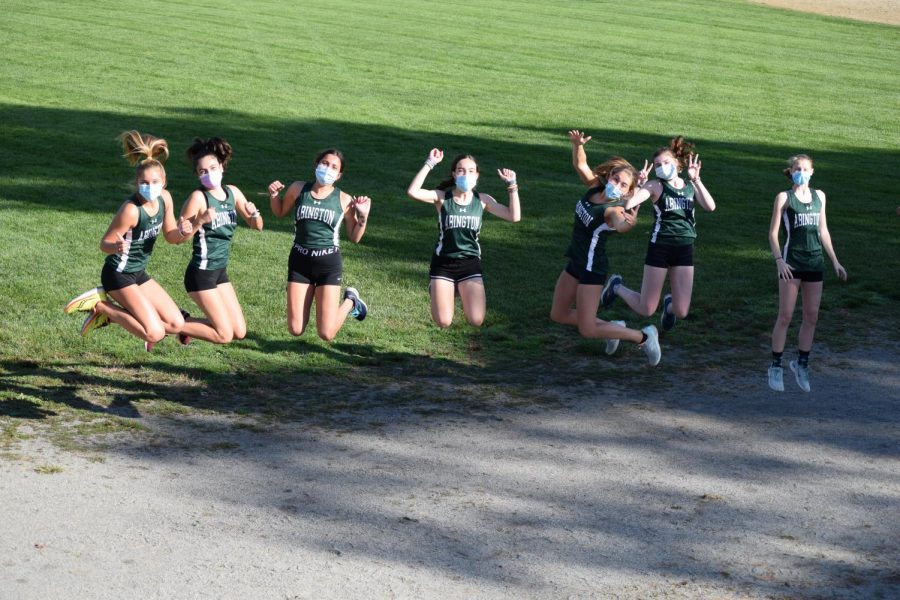 The Abington High School Girls Cross Country team leap for joy at their meet against Middleborough on October 21, 2020.

The Covid-19 pandemic has affected many student athletes. Their seasons have been cut short, they have to maintain many federal and state regulations, including wearing masks while participating.

Despite these difficulties, the Abington High School Girls Cross Country team showed drive throughout their season. Covid-19 was not going to stop them from accomplishing their goals.

For cross country veterans, the meets were very different from in years past. Due to social distancing, not all athletes could compete in the same heat together. Therefore, the team was split into two groups to race.

This season was unlike any other for the coaches as well. When asked how he prepared for this season, Coach and Abington Middle School teacher Matthew Campbell said, “I had to scratch all of the plans I had mapped out over the summer and just accept the flexibility and that things were going to change on the fly. This season I put less emphasis on the logistics of running and more on the camaraderie, team support, and the wellbeing of each individual athlete.”

At first, the new restrictions and rules were a hassle, but athletes like Jaqueline Earner ’22 kept a positive outlook on their season.  “Wearing the masks while running were an obstacle that we had to face. However, it got easier overtime” she said.

The team had to make even more adjustments this season. When Superintendent Peter Schafer sent out an email and call on Monday Oct. 26, stating that on Tuesday Oct. 27 the District would shift to the remote learning model for two weeks due to the increased number of Covid-19 cases in Abington, this meant that every high school sport was suspended until the district returned to the hybrid learning model.

Coach Campbell said he “had an emergency meeting the night we found out that school was shut down for at least the next two weeks, and we discussed that this season might never return.  I asked them point blank if they were all willing to keep fighting and training despite having no idea of a future return. Without thinking twice, in unison, they all said they want to keep going, keep fighting, and keep pushing themselves.”

Campbell said that, “at that moment, I knew this team was special and could potentially make history. That will remain as one of the highlights of my coaching career.”

During the period of remote learning, Coach Campbell gave the girls a structured program of workouts to follow in order to stay in shape. Not knowing if their season was going to continue, every girl kept training and held onto hope that they would finish out their season.

Mia Scarpelli ’22 said, “Coach gave us a tempo run one day and I set a personal record giving me the motivation that if I can do this now, I can do this when we return.” To hold each other accountable, the team used an app called Strava where each girl could track and post their runs for the team to see. Also, each teammate could give  a “thumbs up” on their posted run to show support and motivate each other during the remote learning time period.

Hannah Tirrell ’23 said, “Although this was a set back, the team was able to treat it as an opportunity to work even harder and to come out of this stronger.”

On Wednesday Nov. 11, sports could resume. They traveled to the South Shore League Championship meet at Middleborough.  The team hadn’t trained together or competed in a meet in over two weeks. Earner ’22 said, “The team environment calmed us down because we always play music before every meet.”

The song they sang at their last meet was Low by Flo Rida and T-Pain. It had been a tradition for the girls to listen and dance to this song to relax them and get them hyped before every meet. They never knew all of the words, so for their last meet against Randolph they each learned a verse of the rap and performed it together.

Although Covid-19 may have disrupted the season, the team had many takeaways from this season. Madison Carini ’23 said, “This has been the most connected and comfortable team I have been on. I was never being judged.”

Teammate Gabriella Maciel ’22 said, “We never knew if there was going to be practice the next day, so it made us appreciate the time that we spent together.”

Although the two-week shutdown was not ideal, Allison Lindvall ’23 said, ” Being together again felt better than it did before the shutdown.”

Earner said, “Middleborough was one of my favorite meets because after our big win there was a moment of realization that not only did we have great team spirit but we also had a lot of talent.”

Coach Campbell said, “The success of this season was not only from one person but instead came from a complete buy-in from all of these athletes.”