Mrs. Clifford retires in 2020 after two decades in Abington 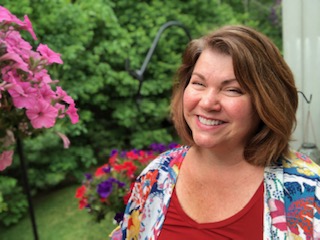 Mrs. Andrea Clifford poses on the back porch of her home on Wednesday, June 10, 2020. This is her final year as an English teacher at Abington High School.

With 20 years of experience as an English teacher at Abington High School, Mrs. Andrea Clifford will retire in June of 2020. Before leaving, Clifford elaborated on her life before teaching, her time at AHS, and her retirement plans.

At first, Clifford was unsure of her path and switched her major numerous times during her freshman year of college. While experimenting with classes to find her passion, Clifford took Theater, Cultural Anthropology, Philosophy, Psychology and Music classes.

“I kept taking English electives, and before I knew it, college was over and I had a degree in English and Music,” Clifford said.

Clifford was warned not to become a teacher for a variety of reasons. However, once she made her decision and got into a classroom, she felt right at home.

“Where else can you share the wisdom of the ages found in the classics, and explore current events through the lenses of the sages? Where else will students honor you by sharing their hopes, dreams, thoughts and concerns? In English class. Just had to be there,” said Clifford.

Prior to becoming a teacher, Clifford had experience in social justice. She worked in the Department of Youth Services at two different detention centers. She worked as a tutor, teacher, and counselor at those centers.

“I monitored and taught boys under 18 who had committed multiple violent crimes and were in a lock up facility. This was well before the world understood how mental health, addiction and learning issues can affect impulse control, so I found myself trying to advocate for therapy, healthcare and quality education for the young people held within,” Clifford said.

Clifford has been an English teacher at Abington High School for 19 years. Prior to that, she was a substitute teacher in the school system for one year, totaling her time at AHS to 20 years.

This year, she had the opportunity to teach juniors in American Literature, as well as AP English Language and Composition. This was Clifford’s first year teaching an Advanced Placement class.

“I don’t really have a favorite class, because the subject matter is always interesting, but when I get a classroom full of students who are open to learning and taking risks in their thinking and creating, I absolutely love it! There is nothing better. Okay, Public Speaking was always a challenging favorite when it was offered at AHS,” Clifford said.

In her time in Abington, Clifford has been involved in the Gay-Straight Alliance (GSA) as well as an improv group called the “Improv-ables”.

Many years ago, a handful of teachers  including Clifford were approached and asked to be the advisor for GSA. She accepted the position and thus was the first advisor for the group.

“We had a few members, and we attended several conferences. The students seemed to appreciate the perspective that they experienced when they visited other schools and participated in some of the activities. I am so glad that it is still going on,” Clifford said.

Clifford was also the advisor for the “Improv-ables”, an improv group that ran at AHS for a few years. “Amazing things can happen when students unleash their creativity and energy on stage and create scenarios on their own, she said.”

In college, Clifford said she did improv and “always loved acting and being in theater. I taught some improv in my Public Speaking class to warm nervous students up before speeches, and they loved it.”

From there, Clifford formed the group. “I asked them if they would do it as an after-school activity, and so many students were interested. We had about four years of Improv, and it was a blast. So many super-talented people, thinking on their feet, improvising and honing their speaking and thinking skills disguised as playing,” Clifford said.

Mrs. Clifford organized the career day at AHS in the fall of 2019 for the senior, junior, and sophomore classes. When asked why she wanted to organize the activity this year, Clifford said, “I wanted to organize Career Day because my students were asking for it. The message came through loud and clear that they really needed to see the relevance of the things that they were learning here as applied to their future life and career options.”

In organizing such a large event, many things are needed to make it a success. “Abington can be a very supportive community, and I just knew that if they were asked to contribute what they know to our students, they would jump at the chance. And they did,” Clifford said.

Clifford said she enjoyed organizing the event and strongly encourages more community connection in the future to make the day even more successful.

While Clifford has numerous great memories, a few students’ experiences stick out. “Every year, there is at least one student whose curiosity and understanding just blooms, and every time that happens, I make an effort to be conscious of it, because that is where the magic is! You can see it in their eyes and feel it in their energy. It is a real gift,” Clifford said.

This happened first in a Level 3 Freshman English class. “We were studying Hamlet, and she made a connection that the character, Hamlet was a “Messiah figure”, and was so very proud of herself. All of a sudden, the whole play had a much richer meaning for her, and she recalled other bits of evidence that proved that there was a deeper message for her to ponder. Mind blown,” Clifford said.

While explaining what she will miss most about AHS, Clifford said, “It has been an honor to be part of educating a generation of Abington students, and I will truly miss them. I will also miss working and learning so much from my colleagues! Amazing people, doing the impossible every day!”

When asked what she plans to do in her retirement, Clifford said, “It feels strange to me to use the word, ‘retirement’, because I know that in one way or another, I will be teaching forever.”

For the foreseeable future, Clifford will be employed as an Executive Function Coach. In that job, she will “work one-on-one with students who need support in managing and balancing their lives, including schoolwork, college, a job, social lives, etc., and working effectively toward their goals.”

“I do have some hobbies that I hope I will have more time for: biking, hiking, storytelling, voice-over, painting really bad pictures. I hope to visit my son and daughter-in-law-to-be in Melbourne, Australia,” Clifford said.