Abington High Reaches Out to Australia 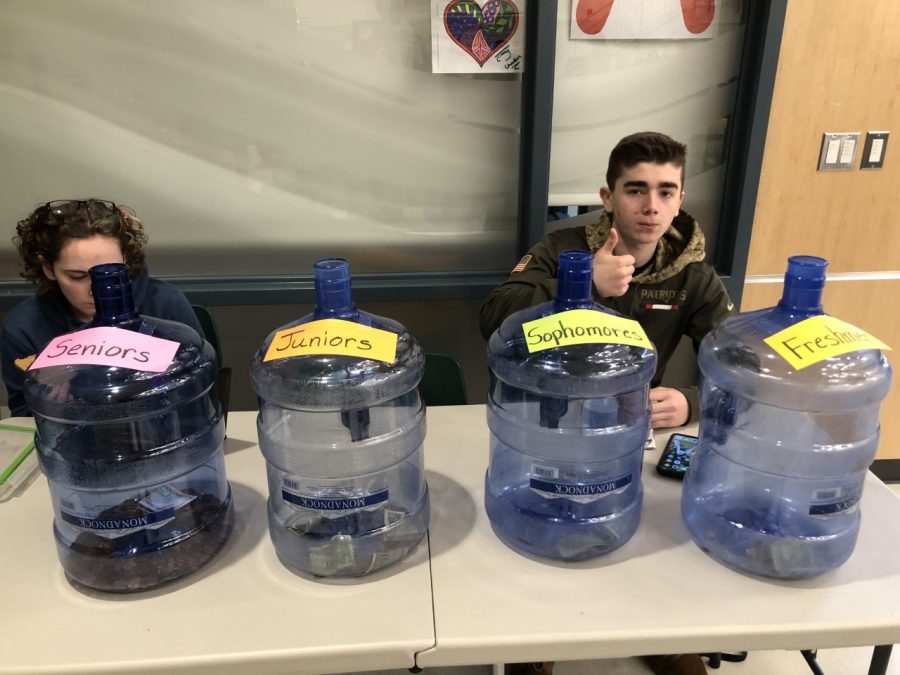 Abington High School freshman Amaya Turner and junior Jack Clifford, members of the Green Wave Gazette, sit with the Penny War containers in the cafeteria on Tuesday, February 11, 2020. They are two of about a dozen students who helped in the fundraiser.

On Monday, Feb. 10, until Friday, Feb. 14, a Penny War took place in the Abington High School cafeteria during all three lunches.

Over the course of a week, several student members of the four clubs volunteered their help with the fundraiser by collecting money during their lunches.

Other students who were not on the clubs, like senior Drew Wilson, also lent a hand. When asked what he did to help, Wilson said, “I made a sign to display all of the information we needed.” When asked how he felt about the overall fundraiser, he said, “I felt it was a lot of fun and was for a good cause.”

The Penny War was a week long event where all the classes competed to try and raise as many pennies as they could for the Australian fires and to help save the animals. Senior Johnny Hawkesworth helped supply the jugs to put the pennies in. These jugs were set up during lunch and students could put money into them. Every dollar bill put in a jug was minus 100 points, and for every penny it was one point.

In the end, the Class of 2020 contributed the most pennies. But the class that won was the Class of 2023 because they had the lowest negative points. So they were able to win. As winners, the freshmen got Dunkin munchkins delivered to their homerooms on Tuesday, Feb. 25.

The real winners of the Penny Wars were the furry burn victims of the fires. In the end, $375 was raised and will be sent to the Australian Zoo Wildlife Warriors, and organization founded by Steve Irwin.