Dream to Be a Teacher Turns to Reality

AHS Alumnus Susan Mullen loves what she does 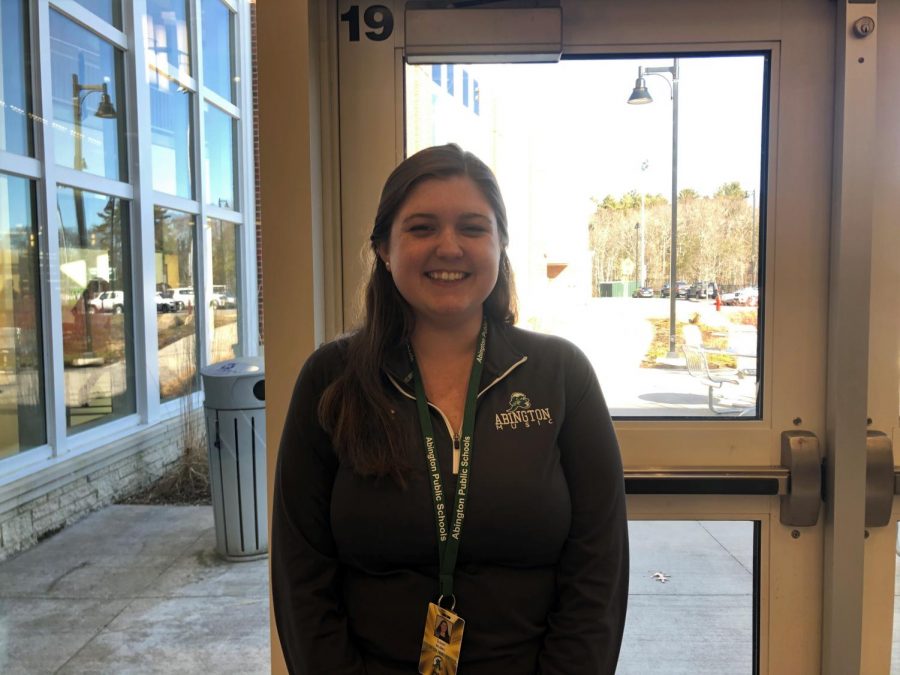 Miss Susan Mullen, an Abington High School paraprofession and alumna, is standing in the school's cafeteria on Friday, February 28, 2020.

Abington High School has many new teachers this year, including several returning alumnae, one being Miss Susan Mullen.

Miss Mullen graduated from Abington High School in 2015, where she was Editor-in-Chief on the yearbook. After high school, Ms. Mullen went to Stonehill College in Easton and graduated in 2019.

After college, she worked at Disney World for six months. She worked at the “Pirates of the Caribbean” ride and for Disney’s Halloween and Christmas Parties.

As much as she enjoyed working at Disney, Miss Mullen said she has always wanted to be a teacher. “In my 2nd grade yearbook from ECC, I’d said I wanted to be an 8th grade math teacher,” she said.

When asked why she wanted to become a teacher, Miss Mullen said, “When I was little, I used to go to my mom’s classroom, and I enjoyed helping her students. I was in Kindergarten. She taught at a high school for students with severe special needs. I used to go and do math workbooks and they always thought I was so smart.”

Miss Mullen started substituting at Abington during her sophomore year at Stonehill. She substituted for different teachers at the Frolio, and then the new middle school. In addition, she has also substituted at different schools around Massachusetts, including Whitman, Stoughton, Brockton, and Easton.

On Jan. 13, 2020, Miss Mullen officially started a career at Abington as a paraprofessional in classrooms at the high school. Miss Mullen has some favorite parts to her job. When asked what her favorite part of teaching is, she said, “I always enjoy that moment when kids get it,” meaning when students understand what they’re doing after struggling for a while.

When asked about what it is like to begin achieving her goal of becoming a teacher, Mullen said, “Pretty fulfilling. I wouldn’t say I’ve achieved it just yet.” She said that her goal is “to have her own classroom,” but in the meantime, Miss Mullen said, “It’s cool to be doing a job that is something that I want to do, so I like going to work.”