All they want to do is dance together 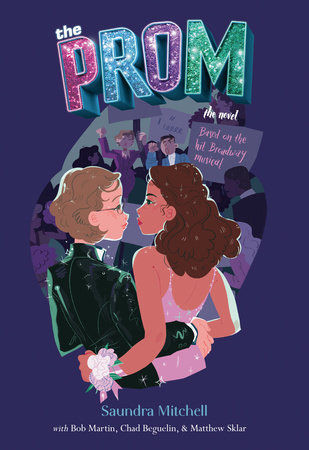 "The Prom" is a teen and young adult novel, released in September 2019 and based on the hit Broadway musical by Saundra Mitchell, Bob Martin, Chad Beguelin and Matthew Sklar. It is soon to be a Netflix release.

“The Prom” by Saundra Mitchell is a fictional story about 17-year-old Emma Nolan, a high school senior who wants to be able to dance with her girlfriend at prom.

Alyssa Greene is the school’s “It” girl and is Emma’s closeted girlfriend. The two struggle when Alyssa’s homophobic mother and president of the PTA gets Emma banned from the prom and then is determined to have it cancelled all together.

The book takes place in Edgewater, Indiana in 2019. The setting drives the plot of the story since people in the Midwest are typically thought to be more conservative and would not support Emma and Alyssa’s being together.

Besides “The Prom,” Mitchell has written “Shadowed Summer,” “The Vespertine,” “The Springsweet,” “The Elementals,” and “Mistwalker.” Mitchell also edited the anthology “All Out and Out Now” about LGBT teens, which makes it similar to this work of literature.

“The Prom” is told in first person perspective, switching back and forward from Emma and Alyssa’s points of view. I enjoyed the shifting narration because it is easier to understand what the characters are going through. The switching perspective helps show what both girls are going through for the entire experience.

Hearing from the two protagonists perspectives displays the overall theme of the novel, which is to let people love who they love, no matter the circumstances and one’s own personal biases.

I liked the book because it is based on the musical “The Prom,” which is my favorite show. Unlike watching the musical, it was nice to be able to see the thoughts of the main characters and how they were feeling throughout the book.

Both Emma and Alyssa are very relatable characters that the audience can connect with. Also, unlike the musical version, the book provided more exposition about Emma and Alyssa. So even if you don’t know the show it is based on, you can easily follow along.

A few things I disliked about the book were that they changed some elements that were originally in the show. For instance, they cut out some characters and they changed some rather crucial moments that were originally in the story. These changes disappointed me slightly, but nonetheless the book is still wonderful. I would give it 4.5 stars out of 5.

The book is not perfect, but almost perfect. The plot and theme is outstanding. Because of that I would encourage others to read this book because sadly, things like this still happen today. LGBT couples are often ostracized and discriminated against, and LGBT teens struggle even more. They get bullied, threatened, and in the worst-case scenario, they can get disowned and kicked out by their parents, just like in the book.

LGBT couples still get excluded from their proms by homophobic authority, and this book goes to show the struggle that the LGBT youth go through on daily basis. I hope by encouraging others to read this, it will raise awareness to this serious problem and hopefully change some minds.