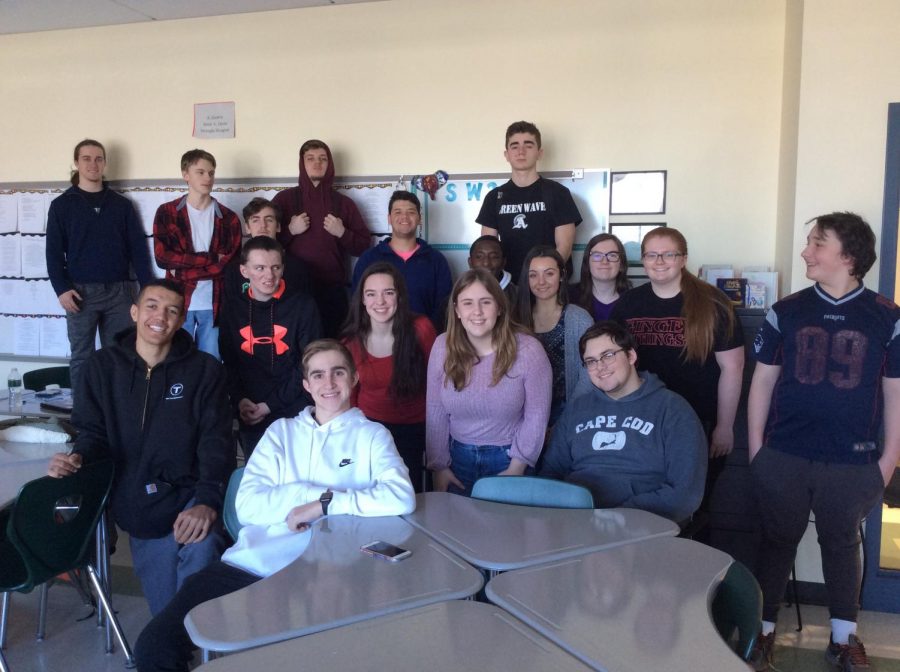 Over the past few weeks, Abington’s Journalism and Digital Production class taught by Ms. Pflaumer has been working on their biggest project yet. A whole news show for Abington High School!

This project called “Green Wave News” took a lot of planning and time to fully do. After a week of planning, the students then used the Abington CAM studio for five days.

Seventeen students were involved in the making and planning of the show. In the end it all worked out very well, as the show was “a huge success,” according to senior Emily Christian, who was the editor of the news show.

Each student signed up for positions they wanted to cover, or if undecided they were assigned a role. One role was the weatherman, covered by sophomore Chris Lussier and assisted by senior Sean Moran. “I helped him [Lussier] out a bit with the script, gave some ideas, and created the storyboard” for the weather segment, said Moran.

Lussier had to be before the camera. He said, “I was feeling nervous because I was not used to being on camera.”

Another person who felt nervous during shooting was senior Joao Carlos Andrade. He was on the sports team with junior Jack Clifford and sophomore Maria Wood. Andrade covered the international sports segment. He said, “It was kind of scary because it was my first time on TV.” His segment was a tribute to Kobe Bryant. Andrade had both a Neymar and Bryant jersey during his segment. He talked about Neymar in particular and Neymar’s tribute to Bryant, who was a big fan of soccer.

Clifford did local sports. He said he “felt confident going first,” meaning he felt good about going first out of everyone in his sports segment. Clifford, a sports writer for Abington’s “Green Wave Gazette,” said he had “no problem doing local sports on the news.”

However, the show was not without some challenges. On Clifford’s first take he messed up, causing the production crew to have to do a few more takes. But Clifford said this only motivated him to do better.

Another student who felt very confident in what he was doing was sophomore Vinny Kariuki, who along with senior Kayla Larkin-Goodman created the health segment. Kariuki reported on it alone because Larkin-Goodman said “I have stage fright.” After the show was done she said she would like to be in front of the camera next time. “I feel more comfortable now having seen it,” she said.

Kariuki said “I’m used to being in front of the camera.” He had already done a show where he interviewed people called “Vinterviews” which aired on Cable TV’s “Education Channel.”

Seniors Kathryn Sage and Robert Tashjian worked on the Dr. Sullivan interview, the longest segment of the news show, which could be considered the most important part. Tashjian said his favorite part of the news show was interviewing Dr. Sullivan. Kids who usually are in trouble are the ones who see her, so the impression is often one-sided. He liked “getting to experience her first hand and finding out some of the student rumors about her aren’t true.” He added, “She is actually a funny person and cares about her job and the student body.”

Sage, who planned the interview with her classmate Tashjian, said that the hardest part of setting it up was “coming up with the questions.” Sage also said that she “accidentally turned the camera off for a small part of it,” and that she “gives a lot of credit to Emily for editing the whole thing.”

Christian is the person who put it all together. She was in charge of editing the whole news show. When asked if she had any background in film making, Christian said, “I am part of the Film Club and helped found it.”

All in all, the hard work by everyone involved really paid off and in the end the “Green Wave News” was a success.