With Project 351, Hannah Tirrell Gives Back

Tirrell completes her one year position as ambassador 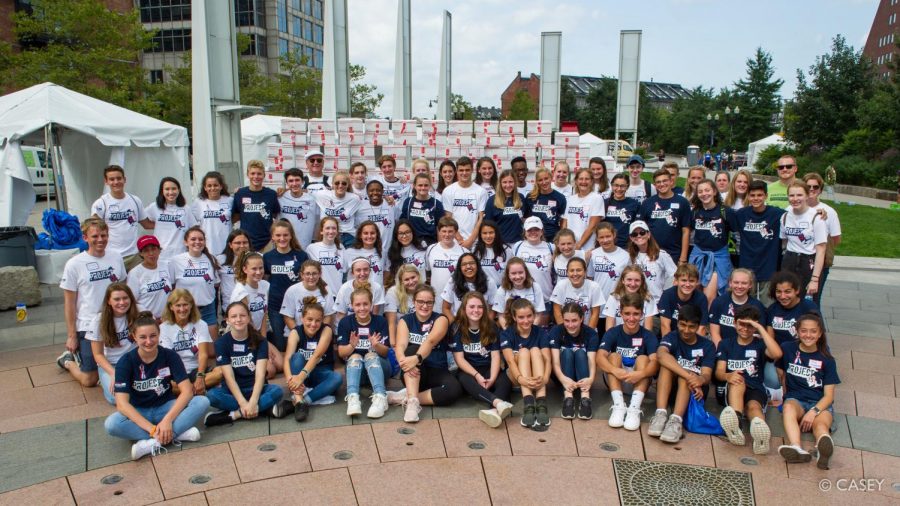 Hannah Tirrell and the rest of the project 351 team in Boston, on September 11, 2019. Hannah Tirrell fourth row, seventh from the right, in blue. 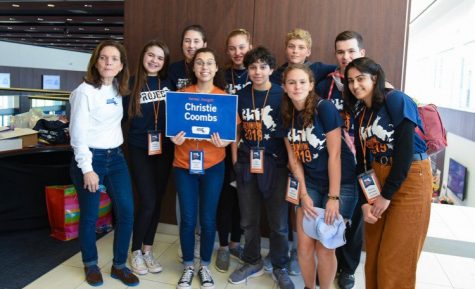 Hannah Tirrell (second row, center), her Project 351 group, and their sponsor Mrs. Christie Coombs of Abington (front row, far left) in May of 2019 at the Project 351 Reunion.

Hannah Tirrell was an ambassador for Project 351.  Tirrell, who is now a freshman at Abington High School, is passing down her mantel to Jack Reagan, president of Abington Middle School’s student council. Regan said, “I am looking forward to meet new friends (on launch day) and helping out throughout the community. ” Launch day is the first day the new student ambassadors meet other ambassadors from around Massachusetts.

As she steps down, Tirrell said that she enjoyed her time as an ambassador. She described Project 351 as  a “non-profit organization that builds unity in Massachusetts through engaging eighth graders in service.”

Every year Project 351 brings an eighth grader from each of 351 Massachusetts towns and cities into its organization. The teachers of that school choose the students that joins the program.

According to the Project 351 website, the ambassadors don’t have to fit a mold, but they must have this quality expressed by Dr. King, “a heart full with grace and a soul generated by love.” \

The mission of Project 351 is to build a group of youths to work on service projects and produce more kindness. They are working towards these goals: “ courage, compassion, and unlimited capabilities of eighth grade unsung heroes and quiet leaders,” according to the Project 351 website.

While working with Project 351 Tirrell did many important things for the community. Her favorite project to work on was the fall service project. This project was a food drive for St. Vincent de Paul food pantry. In total, her and her team collected 533 pounds of non-perishable foods. She enjoyed the  camaraderie of the program. She was able to share her passion of service with others who also had a passion to make a difference.

The four pillars of Project 351 are compassion, kindness, humility, and gratitude. These are important pillars that everyone should strive toward. For those  not in the program but still looking to make a difference, Tirrell suggested to “engage yourself in the community by asking around town where you can help. Ask your grade’s ambassador, or the current ambassador, how you can help with their project.”  Getting involved in your community is important it teaches goodness and leadership.

Tirrell is now heading toward the next step of her Project 351 career. Since she has now aged out of her ambassador position, she will be joining the Regional Service Team (RST). The RST is a pair of students that works on service projects in their region instead of just their town.

If interested in community service at Abington High School, Peer Leaders, led by Mr. Siegel, is a place to start. Or contact Hannah Tirrell if you have any questions about what she is pursuing through RST.