A Veto on Vaping 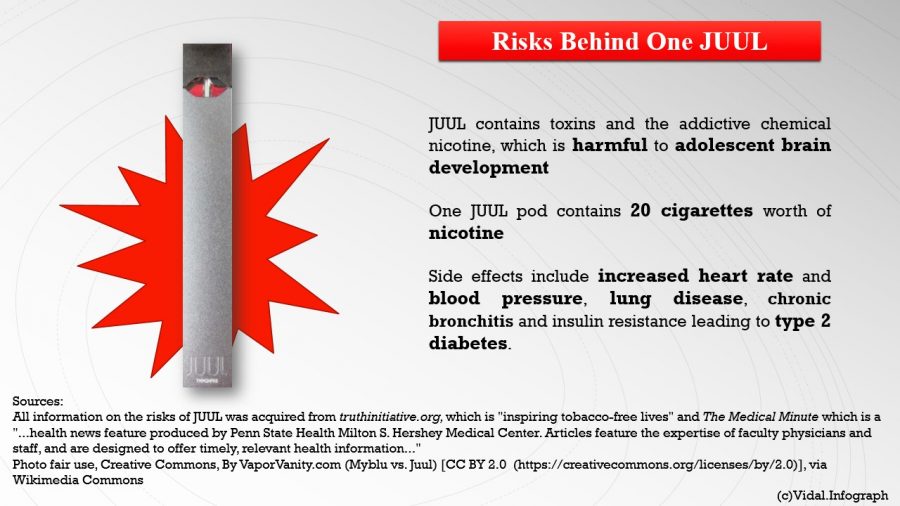 An Infographic showing the risks associated with the JUUL, created in 2018 by Lidia Vidal, a student in the Class of 2021 at Abington High School.

As of Oct. 22, 2019, the Centers for Disease Control and Prevention (CDC) has counted 1,604 lung injury cases associated with the use of vaping products. More alarmingly, 33 deaths have been confirmed in 24 different states, including a recent death in Massachusetts. All patients have reported a history of using e-cigarette, or vaping, products.

These reports, in addition to the popularity of vaping among teenagers, sparked public outrage from public health officials, parents, and educators. The presence of e-cigarettes (particularly those produced by JUUL Labs, Inc.) in schools has prompted teachers to inform students about the alleged dangers of vaping.

Vaping has not been in the spotlight for many years, but, in recent months, it has caused enough uproar for the government to take significant action.

Massachusetts has taken the strongest measure of any state: a four-month ban on the sale of all vaping products. The ban has proved controversial. A lawsuit was brought by vaping shops and companies against Governor Charlie Baker and the commonwealth of Massachusetts.

This ban was put into action in response to the abrupt rise in reported illnesses and deaths caused by vaping products and devices. According to a September 11 New York Times article, last month, President Donald Trump met with the government’s top health officials in the White House and voiced his concerns about the increase in vaping among the nation’s youth. “We can’t allow people to get sick. And we can’t have our kids be so affected,” Trump proclaimed during the meeting.

The Food and Drug Administration (FDA) then announced a plan within the coming weeks to remove all flavored e-cigarettes from the market, including popular flavors such as mint and menthol.

These regulations were practically inevitable; the FDA has faced mounting pressure from public health officials, parents and educators, who are deeply alarmed by the popularity of vaping among teenagers. Juul Labs has been accused of deliberately targeting youths, although their mission is to eliminate tobacco cigarettes and improve the lives of adult smokers.

On the topic of e-cigarettes and their intended purpose, Ms. LaPointe, a nurse working at Abington High School, says, “I think it wasn’t used as initially intended. The design of the device is geared toward young adults. They come in different flavors and they’re easy to hide. Plus, it’s so much easier to do.” The colorful flavors and sleek design of Juul e-cigarettes are the main factors that attract teenagers.

A letter dated Sept. 18, 2019 and sent to the editor of the “New England Journal of Medicine” (NEJM) cites a Monitoring the Future survey taken. In the survey, five million minors reported that they used e-cigarettes recently. Astonishingly, about one-quarter of the nation’s high school students reported vaping in the last 30 days since the survey was taken.

Despite the concerns, local vape shops have voiced their dissatisfaction with the Massachusetts vaping ban. After a state health board approved Baker’s plan, retail shops were forced to clear shelves of products and even let go employees. According to an Oct. 4 USA Today article , Joseph Terry, an attorney representing vaping companies, said the ban “presents an existential threat to their business and their industry.” Terry’s clients are at risk of going out of business.

It is not only vape shops who are questioning Governor Baker’s abrupt decision to target vape vendors. “I was initially happy, but I grew concerned,” says Ms. LaPointe, giving her opinion on Baker’s ban. “There was no warning, so people who were addicted were unable to wean themselves off it. I also haven’t heard a plan after those four months. The ban comes off as reactive, not proactive.”

Although economic hardships will result as more states combat the abrupt outbreak of illnesses and deaths from vaping, these radical measures have contributed to deeper investigation of the dangers of these popular products.

Ms. LaPointe wants people of all ages to be wary of e-cigarettes. “They don’t know what’s in it. It’s killing people much faster than cigarettes are, not that cigarettes are any good,” she says. As this investigation continues, the only current way for people to assure they are not at risk is to refrain from use of all vaping products.