Wrapping Up with a Little Data 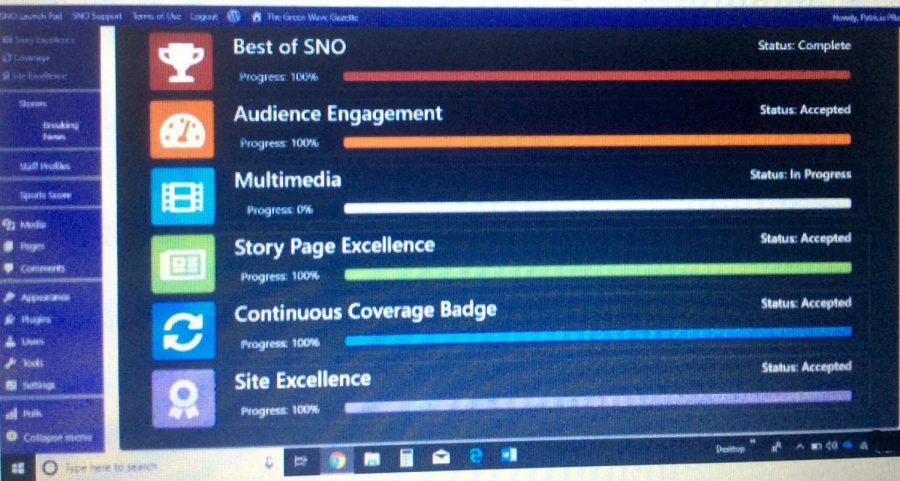 Using Google Analytics and SumAll, the following information has been gleaned.
Articles and Writers
This year 192 articles were published between Sept. 1 and June 3, a record number. The newspaper featured about 80 writers from grades 9-12. The amount of topics and student voices were impressive!
Audience
Between Sept. 1 to June 3 the number of users was up to 13,017. In 16-17 it was 7,486 and last year in 17-18 it grew to 9,717. But this year’s number almost doubled that of two years ago. The largest growth of followers was on Facebook, where the number of users doubled. Twitter also grew by over a hundred users and two new social media platforms were added by the club members: Instagram and YouTube. Due to these increases in social media followings, the amount of users (those reading the online articles) grew.
Sessions
Not only did the number of articles, writers, and audience grow, but the number of individual sessions did as well. This year the sessions were up to 23,829. In 2016-2017, there were 11,264 sessions and last year in 2017-2018 there were 17,653 unique sessions. So in two years, the number of sessions has doubled. “In technical terms, sessions give you an exact estimate of the number of times visitors opened your website and have carried out transactions/activities” according to Digitize Smartly.
Page Views
The number of page views this year was down slightly to 60,276. It was 31,395 in 16-17 and 74,437 in 17-18. Because the number of audience members and sessions are up, it is reasonable to conclude that last year’s articles were often reread by the same user. A page view is how many times the page is viewed, so it one person views the same article more than once, it is counted as two page views, according to Google Analytics.
Behind the Scenes
This year, several new staff members joined, A new feature was added: the Weekly Wave. This has been a great addition. In the first semester, another new feature was added when Lydia Vidal tried her hand with infographics. And photojournalist Erielle Amboy created a section “Erielle’s Photo Feature”. It was great to see students experiment with media.

Two seniors left the Green Wave Gazette this year: Allison MacLeod and Ayman Elhannawi. Allie Mac was on staff for four years. This year she became the Editor-in-Chief. She was phenomenally good at editing and her skills will be terribly missed. Allie was the “go to” person for any questions about AP style or grammar; she was one of the reasons the articles published were always well polished. She was a wonderful leader and role model to the new members as well. Ayman Elhannawi joined this year. He brought a unique perspective to the paper. It was wonderful working with both of them.

Badges and Awards
The School Newspaper Organization (SNO) awarded five badges to the Green Wave Gazette. A record for the Green Wave Gazette! The badges were for Site Excellence; Continuous Coverage; Story Page Excellence; Audience Engagement, and Writing Excellence. The latter badge is given to specific journalists. If a newspaper has three or more award winning articles, they get the badge. The Gazette had four award winning articles this year:  sophomore staff members Lily Bonner, James Mulkern, and Emily Coulsey, as well as freshman contributor Amanda Murphy. When the contest closed on April 30, the Green Wave Gazette ranked 57th out of 226 schools who received badges and awards this year. Abington’s Green Wave Gazette ranked 3rd among MA schools who use the SNO platform.
Top Ranked Articles
Although over 100 stories had 100 or more views this year, this list shows only the top 25.  Whether you are reading them for the first time or visiting them again, enjoy! And, congratulations to the student writers!

It should also be noted that the top story in the history of the Green Wave Gazette on the SNO platform is by current junior Kristen White about Samantha Theodore (AHS Class of 2011) and the charity in her honor called “Make Every Day a Sammi Kinda Day.” The article has had 3.043 views since its publication in May of 2017.
That’s All for Now…Thank You
As the advisor of the Green Wave Gazette, I want to thank the student staff who did a fabulous job. They not only devoted time to weekly meetings, but also did their best to cover a variety of stories. They are a kind and hardworking crew and I enjoyed working with them.

I want to also thank all the student contributors, many for their Students Write to Be Heard Project, but a good amount who wrote simply because they had something to say and wanted an audience. That is really impressive. The newspaper staff did an outstanding job providing a place where many voices could be heard.

In addition to the writers, I also want to thank those who agreed to interviews. Many of the stories would not exist otherwise. It was great to read about alumni and members of the Abington community.

Also, thank you to Justin Shannahan and CAM who have supported The Weekly Wave. And Mr. Schafer for the mugs and Dr. Sullivan for the name plates.

Having an authentic audience is much better than a student writing for just one teacher. So thank you, audience, for reading the paper! If you went the extra step to comment on a story, like it or share it on Twitter, Facebook, or Instagram (shout out to Abington High, Abington Athletics, Dr. G., Abington Music, teachers in and outside of the high school, community members, parents, and many others), thank you for giving the students encouragement and a larger audience.