Every Day Is a Battle to Breathe

Living with a Genetic Disorder 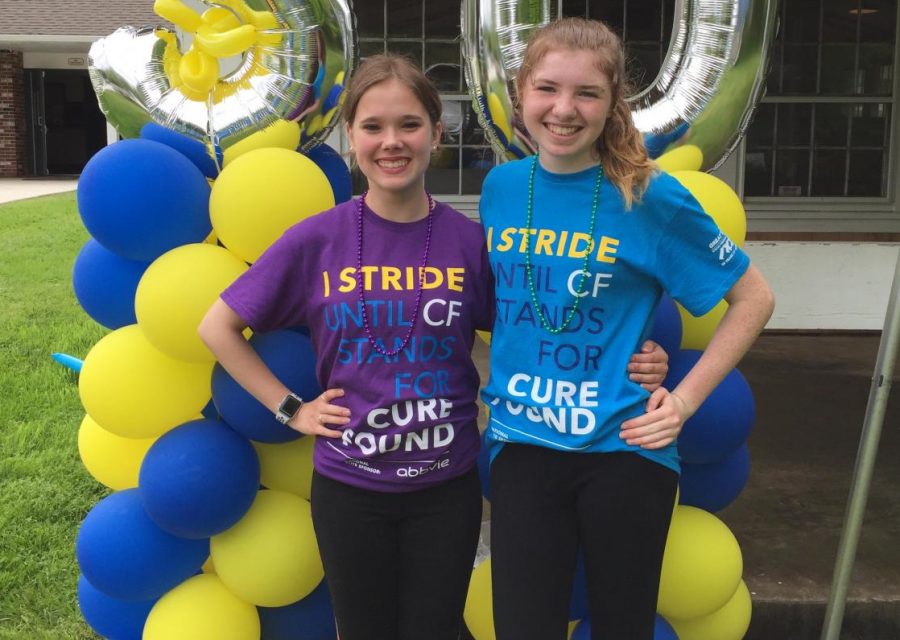 Abington High School freshmen Amanda Murphy (left) and Jackie Earner celebrate at the end of the Great Strides Walk to find a cure for Cystic Fibrosis. The walk took place in May of 2018.

Going to school, some students are nervous about who they are going to sit with, what their teachers will be like, or what friends will be in their classes. I, too, can be nervous about school, but for me I am nervous about sick people. I have to be cautious about them. If they sneeze or if they cough, I could end up in the hospital.

I have Cystic Fibrosis. Some people have never heard of it. For me, it’s my life.

Growing up, I felt like a normal kid. I thought nothing of cystic fibrosis. To me it was that I had to eat applesauce with this weird stuff inside it and have my mom or dad assist with my physical therapy as I laid on the couch watching TV.

As I got older and started going to school, I had to leave class early to go to the nurse to take my medicine. Even today as a high school freshman, I have to wake up 30 minutes earlier for school just to do my treatments.

Even though there have been times that life is easy and looks normal, there have also been hard times, like the car rides going into Boston just to have a checkup, or the times where I have had to stay in the hospital. I spend about 2-3 hours a day doing treatments just to help me breathe. In addition, I take about 28-30 pills a day just to stay healthy. Some days are harder than others. My lungs aren’t always up for facing the challenge that the day will bring. Even though there are negative effects from CF, there are also some good parts.

In 2012 I was in the Boston Children’s Hospital. My mom was across the street at Brigham and Women’s Hospital with my brother Zack who was just born, and I could not see him except from the window. I was 8 years old and his birth was a big deal for me. I was annoyed that I could not see him. The nurses and I made and hung signs in my hospital window for my mom, dad and Zack to see. The Boston Herald came and wrote an article about me called “Window Blessings.” I was on the cover of the newspaper, which we did not suspect. Now, whenever people with CF are in that hospital room, they get told the story about what happened and that the room is famous.

Cystic fibrosis (CF) is a progressive genetic disease. It is caused by a defective gene located on chromosome 7. People with cystic fibrosis are born with the defective gene from both parents who are carriers of the recessive gene. Both of my parents are carriers of the gene. The doctors told my parents that there was a 25 percent chance that I would get CF. When I was born the doctors had to test me to see if I had CF. To do so they had me do a sweat test. The results said that I have cystic fibrosis. I have been diagnosed with CF since I was born.

Cystic fibrosis isn’t the same for every person. It affects the lungs, pancreas, liver and digestive system. In the lungs, mucus clogs the airways and makes it hard to breathe. In the pancreas, the buildup of mucus prevents the release of digestive enzymes that help the body absorb food. Mucus in the liver can block the bile duct, causing liver disease.

For some people it can be bad, and they can be in the hospital a lot. Others like me are doing okay and haven’t been in the hospital in a while. And then there are those who are out running marathons like Lauren B. Weeks. She recently wrote a book called “Growing Up Sick” on her life with CF and how people with CF deal with it, even in the worst moments.

There are people helping those with CF, like Colton Underwood from “The Bachelor.” Underwood has a foundation called Colton’s Legacy Foundation. It helps people with CF get a device called an Afflo Vest. With this vest, someone like me with CF doesn’t have to sit like I do with a normal airway clearance vest and is able to walk around and isn’t connected to anything. Both the Afflo Vest and The Vest by Hill Rom help the lungs by shaking them to help clear them of mucus. Underwood also has a partnership with Pura Vida, a jewelry company. His bracelet and his foundation help raise money to provide more research to find a cure for people with CF.

This year, Underwood heard about me and my story. He sent me a card and an autographed picture for my 15th birthday, which I did not expect. My grandmother, a big fan of “The Bachelor,” had sent Underwood a letter with a photo of me and a poem I wrote in sixth grade about living with CF. On the day before my birthday, I opened the envelope and then the card. I was confused because at first I didn’t know who the picture was of. I showed my mom, and she was shocked because it was Underwood. She then told me what my grandmother had done. It was really nice of Underwood to reply.

Besides Weeks and Underwood, others are bringing attention to CF. There is a movie out called “Five Feet Apart,” based on the book of the same name, and a new song  “Don’t Give Up on Me” by Andy Grammer, based on the movie, that help people have a better idea of what CF is. When I first heard of the movie “Five Feet Apart,” I was happy that CF was being recognized. But I was worried the movie and book were not going to show what CF is like. I was wondering if it was going to be fake and not show the reality of CF.  But I went to the movie with an open mind.

The movie is called “Five Feet Apart” because a cough can spread six feet, and people with CF have to be six feet apart so we don’t catch each other’s bacteria. We have to be cautious when we go to the hospital. Wash our hands, wear gloves, make sure our doctors and nurses are wearing gloves and a gown, and most importantly that we all wear a mask. When I went to the movie, I had to stay physically safe in case there was anyone else there with CF. I had to wear my mask and gloves to stay away from germs.

Stella and Will, the protagonists in the movie who have CF, decided to get rid of a foot and be only five feet apart so they could be closer together. I had a prediction that one of them would die in the end. They are like Romeo and Juliet: two people that are in love but can’t be together. Stella and Will wanted to make the best of the time they had together, since life expectancy with CF is shorter than the average life expectancy. It is a heavy movie because mortality is talked about a lot.

I liked the movie because it shows the reality of people with CF. It also did a good job explaining CF. In interviews, Haley Lu Richardson, who plays Stella, and Cole Sprouse, who plays Will, also do a good job explaining CF. Sprouse said that he didn’t want to take the role until he knew that it had accurate information and wouldn’t offend anyone in the CF community. Before filming began, Richardson, Sprouse, the directors and others that were helping with the movie talked to CF patients and doctors and did a lot of research. A CF nurse was there to help the actors get in character. They did a good job.

With the books, movie and song, a lot has happened regarding awareness this year for cystic fibrosis. And it is only the beginning. People in the CF community like doctors, parents and me are working hard by participating in studies and trying to find a cure for Cystic Fibrosis and make sure that one day CF will stand for Cure Found.

I have been through a lot in 15 years. CF has taught me to make the best out of my life and appreciate the little things.  With CF, I see the world differently. But just because I have a genetic disorder doesn’t mean that I can’t do things that other people can. It doesn’t stop me from being me.

If you would like to donate to my team for raising money for CF, visit my Team Amanda May Great Strides blog. Your donation will help spread awareness about cystic fibrosis and is greatly appreciated.