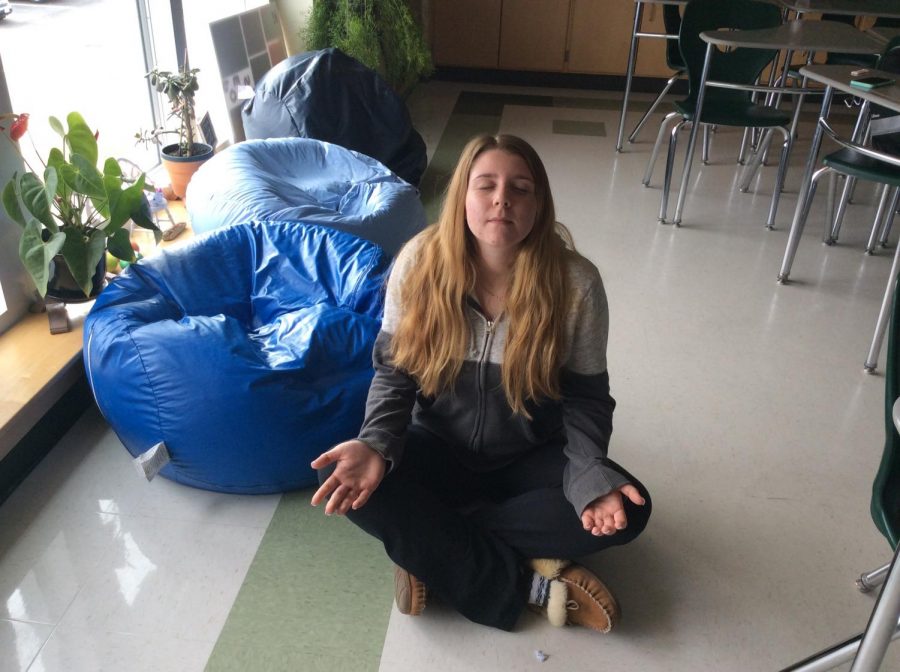 Abington High School junior Kaitlyn Polito has learned meditation practices in her period 7 Mind/Body/Spirit class with Mrs. Daisy. Here she is in English class, having completed her class assignment on Friday, March 29, 2019.

New to the physical education class options for the 2018-2019 school year was a class called “Mind/Body/Spirit.” This unleveled class is available to juniors and seniors as an alternative to a traditional gym class.

The Mind/Body/Spirit class runs for a semester and counts for 2.5 credits. According to the program of studies, “this hybrid course will be a combination of classroom work as well as movement and physical activity. The class will be centered on an individual’s emotional, mental, social and physical health.”

As the elective counts for PE credit, the students go to the gym about 50% of the time, usually two days one week and three days the next.

For the classroom portion of the elective, Mrs. Daisy said that the students focus on “sources of stress, how stress affects the body, differentiating between stress and common emotions, stress management techniques and mental health issues such as anxiety and depression.”

During the PE section of the class, students “focus on yoga, guided imagery, progressive muscle relaxation, meditation, deep breathing and when the weather warms up we will begin to incorporate taking walks,” Mrs. Daisy said.

Mrs. Daisy said that the response to the class so far has been “fantastic.” “The kids seem excited and although not everyone has the best sense of balance, they are at least attempting all of the positions,” she said. Also, Mrs. Daisy loves “hearing stories of students who are practicing meditation on their own and seeking out yoga classes outside of school.”

There have been multiple students that have tried deep breathing exercises at home and school during tests. Senior Casey Strobel said that “the yoga part of the class has really helped me de-stress at the end of the day because I have it 7th period.” She hasn’t used the skills she learned outside of class yet, but she plans to.

When asked what the importance of meditation is, Daisy explained many positive effects. Meditation “can calm a person down and relieve some of the feelings of anxiety in the short term and with continued practice it can ultimately rewire the brain so a person becomes calmer and learns to handle stress in a more positive manner.”

Some negative effects of stress include migraines, high blood pressure, weight gain and suppressed immune systems. And although a person most likely is not able to eliminate every stressor in life, practicing meditation can help prevent stress from damaging the body.