Grease is the Word

Behind the Scenes of the Latest Drama Club Production 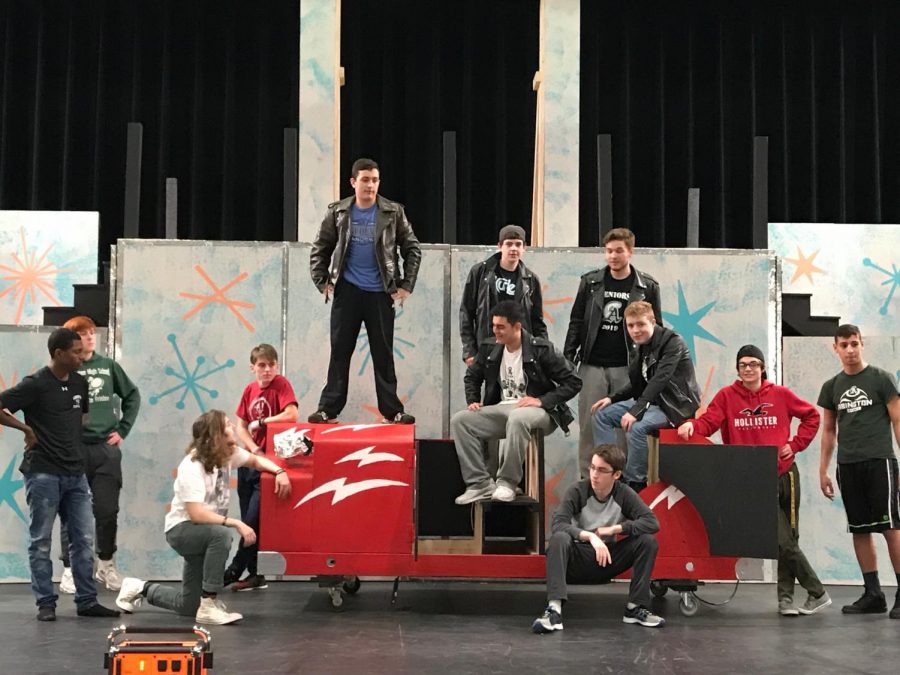 Abington High School junior Connor Saccoach (standing on the car), who plays Kenickie, sings Greased Lightning in a rehearsal held in the auditorium last week. Surrounding Saccoach (on the left) is senior Josiah Rosa, junior Reid Norton, junior Kyle DeGrenier (kneeling), and junior Bobby Molloy. On the right of Saccoach is sophomore Brendan Remillard and senior Jason Kinniburgh (both standing in rear); senior Dylan Magararu, freshman Will Charbonnier and sophomore Brian Tolan (both sitting on the car); junior David Collins, and junior Yaz Zaidan. The AHS Drama Club will present Grease on March 14 and 15 at 7:30 p.m. and March 16 at 2 p.m.

The cast of the Abington High School Drama Club’s production of Grease, directed by Mr. Shannon, is in final rehearsals before performances on March 14, 15 and 16.

You may have preconceived notions of Grease based on the classic movie and other productions. So did I heading into this process as a member of the cast.

Grease tells the story of the Pink Ladies and Greasers when new girl Sandy Dumbrowski (Lyla Blanchard ‘21) transfers to Rydell High, only to find that her summer fling Danny Zuko (Dylan Magararu ‘19) is the leader of the Greasers and has a reputation that does not match the boy she met at the beach. High school adventures of love and friendship are set to a catchy 50s-style soundtrack.

When I first heard murmurs that Grease would be our musical, I had reservations. It seemed to fall short of my definition of a modern musical; I wanted the opportunity to perform a show with complex character development and witty writing, traits that I did not associate with Grease.

Just a few weeks into rehearsal, my attitude had already changed. Questioning those preconceived notions of each character was at the core of Mr. Shannon’s direction. Audience members may assume that Sandy has no strength while Rizzo has no warmth, but the cast has stepped past assumptions like these to bring emotional levels to their characters. We want to make this performance our own, not simply recreate the movie. I also did not expect how funny this show would be. I laughed so hard I cried when I first heard Madisen Caferro ‘19, who plays Jan, deliver some of her lines for the first time.

More than anything, though, Grease is pure fun. Other students have probably seen us walking around singing whatever Grease songs are stuck in our heads that day, and I’m sure that audiences will leave the show humming as well. The dancing, choreographed by Tara Morrison, is an aerobic workout and can be exhausting, but it is some of the most exciting dancing that I have had the opportunity to perform.

Even though I love performing, some of my favorite moments are when I can sit and watch the numbers that I am not in. I always make sure to watch Greased Lightning. The excitement of that song and dance reminds me what I love about theater: being swept up in the energy of the show.

For Mr. Shannon, part of that energy is a sense of nostalgia. “I played Roger in high school,” Mr. Shannon said. “Grease was also the first show I worked on (as Music Director) with the AHS Drama Club as a young teacher back in 1990. So in that regard, I feel as if I have come full circle.”

As a senior, I will admit that I have been feeling nostalgic as well. With opening night approaching, I will not pretend that there is no stress, but I am proud of the work that our cast has put into this show, confident that it has paid off, and above all grateful for these last three years as a member of the drama club.